From its first reveal back in 2002, the all new, fourth generation Kia Sorento have forged its own distinctive path. Representing a prominent characteristic and greater innovative evolution than its predecessors.

With the new platform and refined boldness, Senior Designer Seo JeWon takes us through the different design and distinctive features through time. 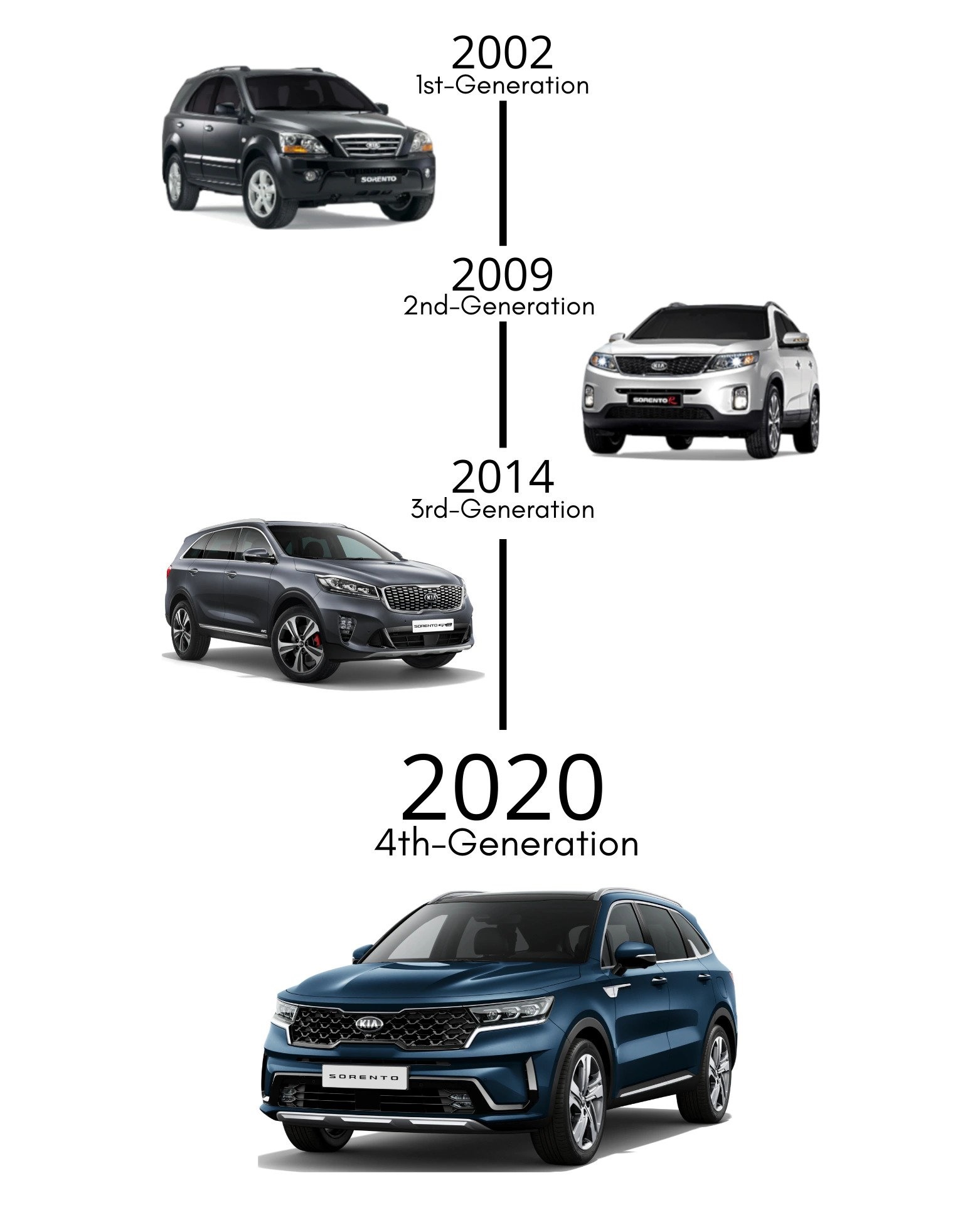 Q1. What are the unique design characteristics of each generation?

The first generation was a very traditional SUV for its body-on-frame design. The design contained a short wheelbase and long overhangs, therefore a tallfirm-looking body. The second-generation Sorento has a longer wheelbase and lower body making it look closer to the golden ratio. Its urban sleek design gained extra space and convenience. The third-generation model got much softer, with a voluptuous body and elegant looks.

The front of the Sorento evolves with a new interpretation of Kia’s hallmark ‘tiger-nose’ grille which the second-generation model first had. It displays a wider shape that organically wraps around the integrated headlamps on each side. The headlamps themselves feature a new ‘tiger eyeliner’ LED daytime running light (DRL), adding extra focus to the design by depicting the intense impression of the lines around a tiger’s eyes.

This sharper, more assertive appearance is complemented by a wide, rectangular lower air intake, bookended by wing-shaped air curtains to channel air around the car. A sharp bumper lip is also capped with a skid plate, enhancing its robust appearance. The new model is wider than the third-generation Sorento.

Q3. Which design element of earlier generations of Sorento did you try to retain?

Q4. What does the concept ‘Refined Boldness’ suggest?

The concept of ‘refined boldness’ inspired Kia’s designers, who sought to maintain the robust, tough-looking aesthetic of earlier generations of Sorento. It applies a greater degree of refinement and elegance and even a sense of sportiness. The body work incorporates shape lines and creases – noticeably more sculpted than its more round-edged predecessor. With more contemporary geometric details and more swept-back, elongated proportions, the result is a more confident, more mature and more desirable design than ever.

Q5. What does the character line represent?

The subtle changes of the fourth gen Sorento has made the overall profile appear longer and faster. The additional length can be found in the wheelbase, adding to the visual characteristics of the Sorento. The trailing edge of the hood wraps around the front wings as it turns into a single, stronger character line that extends along the side of the Sorento and into the rear lamps. Whilst the new cascading grille blends into the island hood and redefine it's voluminous proportions showcasing its extended body.

Q6. Did the new platform play a huge part as you design the exterior?

The new platform is based around a compact engine bay structure and shorter front and rear overhangs, with a longer wheelbase creating greater cabin space between the axles. Not only does this enable the new model’s stylish design and a bigger cabin; the structure and layout of the new platform mean the Sorento is able to be more powerful and safer.

We poured our hearts out within its new look. We wanted to make it look stronger and firm at the front, but slender and sleek from the side. The side character line did all the magic. Traditional SUVs have a strong-looking, box-like back for its horizontal character line of Sorento, however, looks arch-like, just like that of sedans. This makes it overall look sleek, despite the angles all over the body.

Q7. How would you describe the rear design elements, especially the tail lamps?

Inspired by the Telluride, the Sorento adopts new vertical tail lamps that wrap around the side of the body. Sharper lines in the bodywork echo the straight, technical appearance of the front of the car, with horizontal shapes used to make the vehicle appear wider and more imposing on the road. Trim on the sporty lower rear bumper embodies the appearance of dual tailpipes and, like the front, features a skid plate to add to its tough SUV aesthetic. The next-generation model follows other recent Kia models, with the bigger Sorento model name displayed centrally across the tailgate.

Q8. Which design feature would be the most attractive?

I would say the unique interpretation of Kia’s hallmark ‘tiger-nose’ grille. It displays a wider shape that organically wraps around the integrated headlamps on each side. The headlamps themselves features a new ‘tiger eyeliner’ LED daytime running light (DRL), adding extra focus to the design by depicting the intense impression of the lines around a tiger’s eyes. The ‘tiger-nose’ grille is full of a Crystal Flake design, which is inspired by the shape of ice flakes and gemstones.

The shark fin garnish at the C-pillar is quite a catch. This sharper, more assertive appearance is complemented by a wider rectangular lower air intake, bookended by wing-shaped air curtains that channel air around the car. These are usually used for sedans or sports cars, but the fourth-generation Sorento tried to achieve the A sharp bumper lip that is capped with a skid plate to enhance its robust appearance.